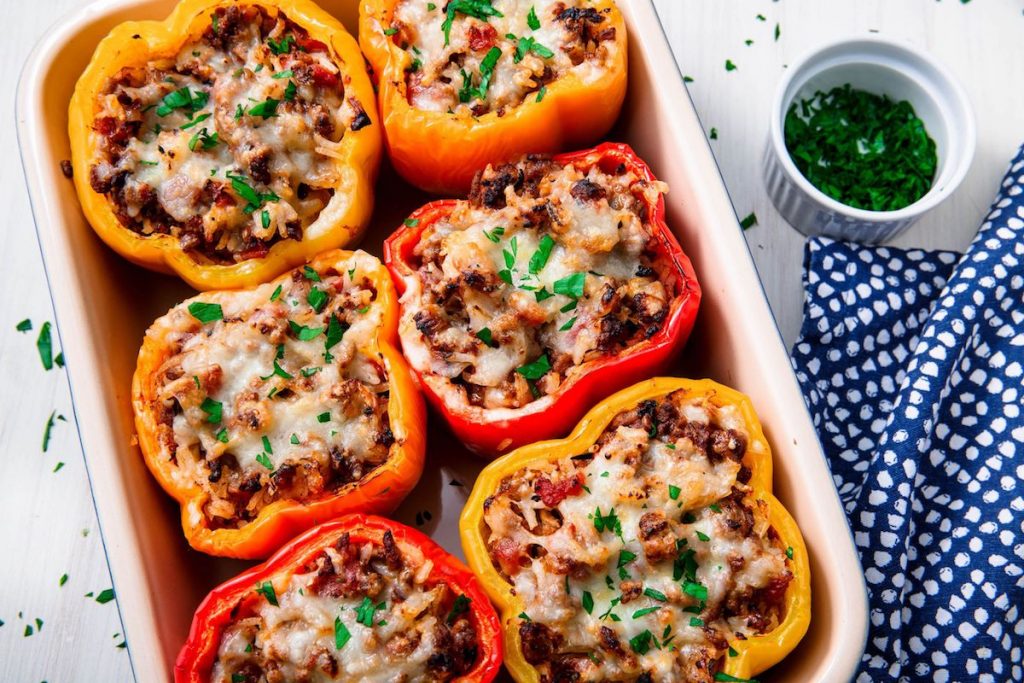 Like so many recipes, Baked Stuffed Peppers is a dish that you’ve probably learned to make one way, with one stuffing and one specific sauce.

It’s likely you’ve been eating it that way…forever.

And while there’s certainly nothing wrong with that, especially if you really enjoy it, it’s always nice to know similar recipes in the event you might want to try something different one day.

Even the classic Baked Stuffed Peppers has many adaptations. Generally speaking, though, it’s made from Sweet Bell Peppers (of any color), stuffed with a mixture of meat, rice, chopped vegetables and seasonings then baked (braised) in a tomato sauce.

Have it your way…

The basic variations within the classic recipe include which meat you use (ground beef, veal, pork, chicken, turkey or other), which rice you use (converted, wild, jasmine, pearl, Arborio), and lastly, which sauce you use (marinara, arrabiata, vodka or any other tomato sauce of choice).

Both work well. It’s only a matter of texture preference.

Me, I’m more of a pre-cooked beef and sweet Italian sausage meat mix with a pre-cooked Jasmine rice and Marinara kinda guy. But that’s just me.

Below is the basic recipe for this classic dish, and then below that, check out some of the modern adaptations you might want to try.

If you’d like to try your hand at some NEW Stuffed Pepper ideas, here are some to try. Without going into individual, lengthy recipes for each one, I think you can quickly see the possibilities.

Instead of ground beef, substitute shrimp, andouille sausage, and chicken. Add a bit of hot chili powder to both the rice and marinara sauce.

Use cooked chicken or taco-seasoned beef. Then use crushed tortilla chips instead of the rice and canned enchilada sauce instead of marinara. Lastly, smother the finished stuffed peppers with a Monterey Jack Cheddar Cheese Blend.

Substitute ground turkey or chicken for the beef.

Use pre-seared, thin strips of beef with sautéed mushrooms in place of the ground beef and wide egg noodles instead of the rice. Cook the stuffed peppers in beef gravy instead of the marinara. Afterwards, stir a dollop or two of sour cream into the gravy to make it stroganoff-style.

When you stop in at any of our four locations and have a grocery list a mile long, we don’t want the wine department to…

We often preach about not straying too far from tradition when it comes to feeding your family and friends on the holidays. To this point,…