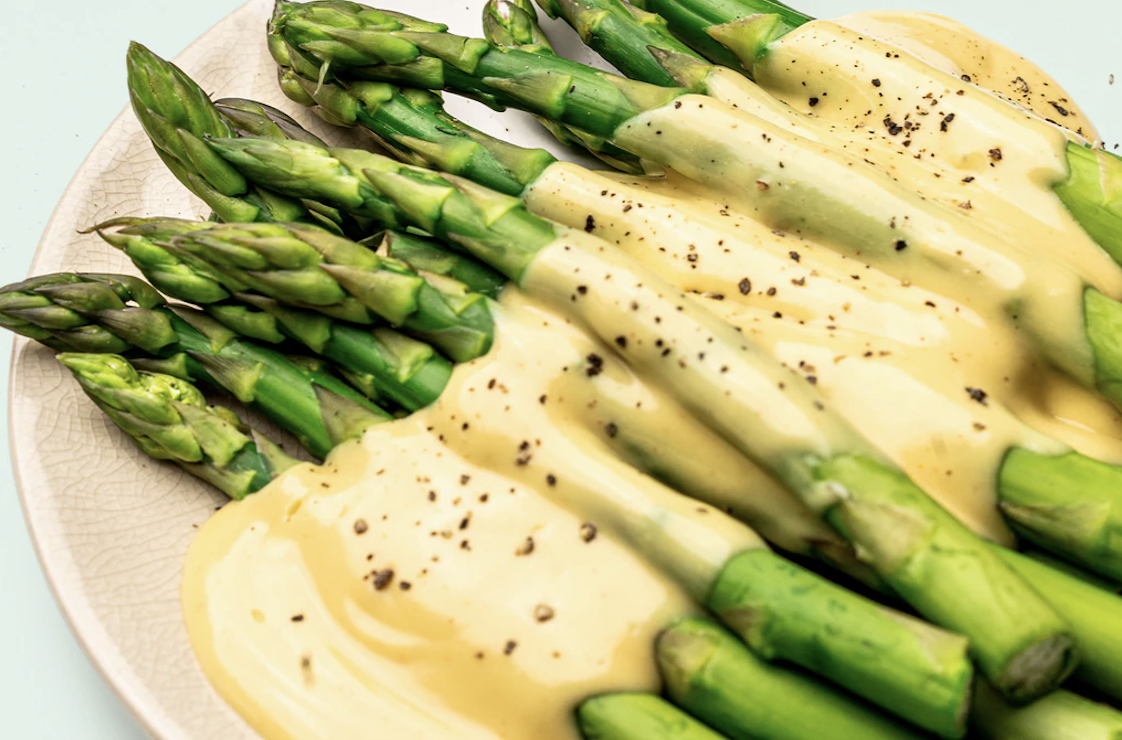 Michigan Asparagus Is IN and on Nino’s Shelves.

Every year, I look forward to the 1st crops, because for my money, nothing beats our locally grown “spears,” especially when they’re “shown off” with a great recipe. A recipe that doesn’t mask their flavor or hide them amongst a half dozen other ingredients. A recipe that lets you enjoy all of asparagus’ sweet flavor and tasty goodness.

And that recipe would be for a sauce: Hollandaise.

Hollandaise sauce is one of 5 “Grand Sauces” that all chefs and devoted cooks learn to make early on. It’s also one that non-professionals are told is just too difficult to attempt.

Truth be known, if someone told you how easy it is to make (and I’ll give you a couple of tips to help you out), you’d probably eat out less often. And chefs get nervous when their dining rooms aren’t full.

The mystique of Hollandaise continues.

So to help you enjoy your new crop of Michigan asparagus, I’m going expose the “Hollandaise Myth” and give you simple tips for these “Spears with NO Peers.”

Hollandaise is made from only 5 ingredients, but it’s the 2 main ingredients (egg yolks and butter) that can give you real headaches if you don’t to pay attention to what you’re doing.

Here’s how you avoid the headaches, and to show you, we’ll make an average-sized recipe of hollandaise.

Before you begin to cook your egg yolks, in a microwave on the defrost setting, melt 1 ½ sticks of butter until the fat separates, and then skim off that clarified butter and reserve.

Second, squeeze the juice from a half lemon and reserve.

Choosing the right bowl and saucepan to make your hollandaise is super important. You want about a small-to-medium-sized saucepan and a mixing bowl that nests within the saucepan, leaving at least an inch of space from the bottom and an inch or so lip at the top. This way, you can easily lift the bowl in and out of the pan as you cook your yolks.

Next, put only a half inch of water in your saucepan and bring it to a simmer. You should have a space between the bottom of your mixing bowl and the water, and that will mean your egg mixture will be cooking gently over the steam and not directly on the water.

This step will help you to cook your egg yolks into a “pudding.”

Place the bowl over the simmering water, and using a whisk, beat the egg yolk mixture on and off the steam heat (about 15 seconds each round). This method will take a bit longer to turn this raw mixture into a thickened egg pudding, but it will also prevent your mixture from cooking too fast and turning into scrambled eggs.

When the egg mixture is sufficiently cooked, the whisk will create tracks in the mixture. This will let you know it’s time for step 2.

Remove the water from the saucepan and lay a damp kitchen towel or paper towel over its mouth. Replace your bowl and nest it in snugly. This neat trick will allow you to do the next step more easily.

This step gets everyone in trouble now, but if you just take your time, there’s NO reason you should ever have a problem.

Start by drizzling in less than a tablespoon; don’t dump it in all at once. Drizzle it in a thin stream.

Once that is incorporated, add another, the same way.

After the 3rd tablespoon, you’ll notice the mixture is getting thicker. Now is when you begin to whisk in a bit of your squeezed lemon juice–about a teaspoon.

Continue alternating butter and lemon juice until they’re both used up.

The hard part is over, now all you have to do is add a few drops of Tabasco® sauce and salt to taste.

Now, if you like Bearnaise sauce, which is a derivative of Hollandaise, omit the Tabasco, and simply add the following, which needs to be simmered slowly over medium heat until it is nearly a paste.

Get-togethers and small parties are on the horizon with some ease in restrictions. Now, regardless of the size of the party putting together a tasteful,…

What Is It About Salmon?

What is it about salmon? Why is it SOOO popular? Just to set the record straight, globally, the most widely enjoyed fish is (insert drum roll here) the…

Everyone has a favorite shellfish. For many, it’s lobster. For me, it’s crab. I’ll take crab, nearly ANY crab, prepared in just about any way…