In my first wine study, we explored the king of wine, Cabernet Sauvignon.  Well if Cab is king, then Merlot is his queen.  It is soft, lush and many times feminine. Sounds tasty, right? Over the past couple of years, though, it has gotten a bad rap, just as Chardonnay did in the 1980s (many restaurant goers were touting the line ABC – Anything But Chardonnay). It is coming back though. To me, it seems as though winemakers are rallying against the bad press and the lingering effects of the movie Sideways.  This 2004 Oscar winner skyrocketed Pinot Noir and left Merlot rotting on the vine when the main character, Miles–a wine snob to the tenth degree, states, “I am not drink any f***ing Merlot!” This wine study will focus on dispelling any lingering thoughts that Merlot is a lesser wine and promoting it to her place upon a throne.

Merlot–A red wine grape that’s name is thought to come from the French word merle, which means young blackbird. Whether it was named this because of its blue/black coloring on the vine or because the blackbirds loved it so, the name stuck.

Where Does It Grow?

As the root of its name suggests, Merlot is most prominent in France, where it is revered, and the main grape in some of the world’s most expensive and elusive Bordeauxs, namely Chateau Petrus. Because of its soft qualities, it is often blended with Cabernet Sauvignon, Malbec, Cabernet Franc and Petit Verdot. Merlot grows in pretty much every wine-making region, most notably Washington, California, Chile, Italy and Hungary.  It ripens early and is more adapted to the cold than Cabernet Sauvignon, making it a favorite of the Eastern European countries. They make many wines from this grape, again blending it often to make sweeter, fruitier reds.

In the colder-weather wine regions, like Washington, the wines end up a little more structured and robust. In Italy, it is the 5th most widely grown grape and is blended often with the light-bodied and acidic Sagniovese, giving the wines more body and a rounded finish. In California, with its long, warm growing season, the wines are lush and fruit forward. This became a blessing and a curse since the ease of California Merlot made it very drinkable and popular but turned off wine connoisseurs that thought these wines were flabby and nondescript. Chilean Merlot also had a sordid tale since for decades it had been picked and blended with the long lost, late ripening grape Carmenere. The wines were unbalanced and tasted of green pepper. Owners of Chilean winery Domaine Paul Bruno brought in experts to decipher if they were dealing with more than one grape. When it was revealed that many wineries were growing Carmenere instead of Merlot, it greatly helped the image of Chilean Merlot.

The primary fruit flavors of Merlot are plum, black cherry, and red currant–non-fruits being chocolate, tobacco, and licorice that are enhanced by oak aging. California Merlot is often a low-tannin wine, leaving a smooth, soft finish. With French Merlots, the tannin levels can be ramped up, leaving a drier finish; whereas with Chile, the finish is a bit peppery.  Overall, Merlot is fruity and appealing.

What Do I Pair It With?

Since Merlot is low in tannin, it can be enjoyed with anything from roast chicken to prime rib. I don’t recommend it with fish, but if you must, salmon would be a good bet. Hearty vegetarian meals, pork, and wild game work too. Cheeses that pair well are milder and creamier, such as Gouda, Gruyere, and mild Blue Cheese.

Now, one of my mentors has a strong belief that wine and food should always go together, inseparable, like the letters Q and U. So when I say that Merlot is one of those wines you can drink on its own, sans food, I hope he never finds out!

What Are My Favorites?

Red plum and vanilla are on the nose with a hint of cherry, medium in body with red currant, cherry and notes of stewed tomato, with cedar and mocha on the finish. This Merlot is well balanced and has nice tannins, a knockout for the price!

If you have a nonbeliever of Merlot in your family, take him or her this beauty.  The Chateau Couronneau is rustic and chewy, with intense blackberry and cassis, sure to fool any wine drinker into thinking it’s Cab. Coffee and raspberry on the finish, with tannins that beg for creamy, decadent cheese.

Iconic winemaker Michel Rolland is a believer in letting Merlot ripen longer, letting it become fuller and more lush. But he’s smart; he only does it in Bordeaux and Washington, where the wines will become mouth-filling and elegant–not in California, where late picking can lead to flabbiness. The Pedestal is everything that is good about Merlot–soft, ripe, rich, and round, with black cherry, forest fruits, cocoa and spice; a silky mouth feel and polish; integrated tannins on the finish.

My dad’s favorite wine is Merlot. Much like my mother, it is adaptable and likable but can also be elegant and complex. I can see why he loves them both.

Walk into any of our stores right now and you’re hit with the abundant fragrance of our Easter Lilies.  Our Floral Departments are covering the stores with bright, beautiful, April flowers and, though there is still snow in the forecast, it reminds me that Spring is in full bloom. Easter is less than a week away and everyone is looking forward to sitting down with friends and family to enjoy the traditional Ham or Lamb. In my family we enjoy both, which makes my job a little difficult.  Do I bring a zippy light bodied Gewurztraminer for the ham? Or a fruit forward, robust, red for the Lamb?

Who am I kidding? I’ll bring both…

Here are my picks for whichever meat you choose!

I love the salty sweetness of ham; it’s the Kettlecorn of the meat world. Whether you like red or white I would stay on the fruity side when pairing this pink meat.

Poor Gewürztraminer, I believe this grape does not get requested as much as it should because of its tongue tying name. However, when it comes to pairing with Ham it is a must! The Gewurz has the customary lychee, pear and spice, but it’s not nearly as sweet as most others.  The fruity front palate and dry, refreshing finish makes this wine unique – and it’s so affordable!

Rose is another option if you like fruity but not too sweet.  This is a light, fruity, Provence with rose petal on the nose and strawberry and red raspberry on the palate. Refreshing and bright, it is the perfect palate cleanser.

Fresh and fruity, this Pinot Noir is dense and big enough for your “red wine drinkers” but light enough to pair with ham. Black cherry, baking spices, and a hint of toasted oak round out the finish.

Jenny had a little Lamb –

When my folks prepare lamb they use fragrant and bold spices and seasonings like rosemary and garlic. When pairing lamb, I like to play up the rustic taste and texture of the meat.

Only 224 cases of this little gem of a Chardonnay were produced. The Juliet Fiero is complex and medium bodied, with loads of ripe pear and apple.  The acidity is bracing to cut through the sometimes oily quality of lamb, but round enough with its touches of lemon curd and butterscotch, to pair well.

Lamb and Cotes du Rhone is a classic pair. Both have an earthy, rustic quality.  In the case of the Chapoutier, I like the notes of lilac, black cherry and plum that are elegant yet firm in structure. This wine is a blend of Grenache, Syrah, and Carignan and was one of Wine Spectators Top 100 wines of 2009.

Saving the best for last, Nino’s has kept the Falesco Merlot on special down from its original pricing at $18.99 because it is such a great value.  Falesco has produced a concentrated and ripe Merlot, with black plum, blueberry, and blackberry, finishing with herbs and a touch of cinnamon. This is a knock out.

So, whether you’re trying out Chef Pete’s new Crusted Red Skin Potato Bake with Ham and Cheese or having a more traditional fare, these wines will make your Easter meal complete!

If, like me, you pull out all the stops for Halloween, you have to be up to date on all the best beverages for your Halloween Party.  Here are my picks for a party so fun it’s scary!

Bogle Phantom Proprietary Red Blend 2007 $18.99 – Like Brigadoon, this Autumnal favorite is visible only once a year and it is like nothing you’ve ever tasted! A blend of Petit Sirah, Old Vine Zinfandel, and Old Vine Mourvedre, Phantom is ripe and luscious with loads of blackberry, coffee and chocolate notes. As it says right on the bottle this wine is mysterious and naughtily seductive.

Ghost Pines Merlot 2007 $19.99 – Named by the Martini family in 1964 for the ethereal gray pines that grow along the coastal valleys of California, this Merlot is elegant and well balanced.  My recommendation for a “go to” crowd pleaser, the Ghost Pines Merlot has cherry and ripe berry flavors with a long finish of baking spices.

Ghost Pines Chardonnay 2007 $19.99 – Floral and fruity on the nose this Chardonnay is creamy with citrusy, lemon curd flavors. A perfect pairing for sweet jumbo sea scallops or a baked brie tart.

Cline Viognier 2009 $10.99 – Parties are always a great opportunity to introduce your guest to something new.  Viognier is a perfumed and peachy white wine that Cline does a tremendous job with!  I picked this particular bottle for the approachable, fruity, food friendly quality, and the black and orange label.

Leelanau Cellars Witches Brew $6.99 – Support Michigan’s economy by buying this fun spiced wine from Leelanau. Flavors of cinnamon, clove and nutmeg add bewitching flavor to this fruity red.  Warmed up Witches Brew is perfect for adult trick or treaters coming in from the cold! 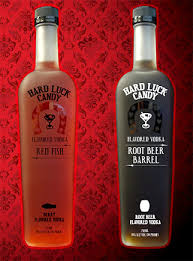 If Halloween is about anything other than being scared, it’s about CANDY!  And the team over at Hard Luck Candy in Detroit has perfected turning the classic candies Root Beer Barrel and Swedish Fish into 70 proof flavored vodkas. Enjoy them as shooters or have an adult root beer float by pouring the Root Beer Barrel over ice cream!  Go to their website for more recipes! www.hardluckvodkamichigan.com 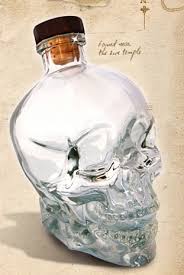 Created by Ghostbusters actor Dan Ackroyd, this striking package holds very excellent vodka.  Quadruple distilled and then triple filtered through Herkimer Diamonds – thought to have energizing powers – this is a good vodka for sipping. The vodka is smooth, clean and slightly sweet on the finish. Be sure to pick up the limited gift set with two skull shaped shot glasses! www.crystalheadvodka.com

That’s right! Absinthe, it is legal again! Lucid is slightly sweet and packs a wallop of anis flavor.  When appropriately blended with sugar and water the green liquid turns milky white. The perfect conversation starter! www.drinklucid.com

Sam Adams Oktoberfest $8.99 – Although most of our Oktoberfest beers are gone, we have a limited supply of this medium bodied, very drinkable beer.  Spicy and rich but not too heavy this beer is a party pleaser.

Magner’s Hard Cider $11.99 – Light and refreshing, this hard cider is not as sweet as some other ciders which makes it more drinkable. It has just a hint of apple with a crisp finish.

North Peak Diabolical IPA $10.49 – This India Pale Ale made in Traverse City is perfect for the Hop Heads in your life. Spicy and floral, the Diabolical is a tasty alternative to Oktoberfest or Pumpkin Ales.

Cheers to Halloween and having a ghoulish good time!