How to Cook Scallops and Shrimp Like a PRO 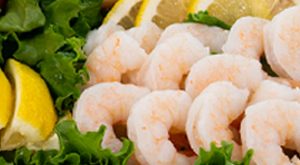 High on my list of things I’d really like to drill into people’s heads is how so many people are cooking scallops and shrimp SOOO wrong. I mean it’s that bad.

Even more amazing to me is the fact that the so-called trick to cooking them correctly is pretty darn easy. That is, unless you’ve gotten used to bland, rubbery, chewy, or dry, in which case, by all means, carry on. NOW, I’ll let you in on the secrets and you won’t even have to write them down. They’re few, but oh so critical.

Scallops come from the water. I get that, but water isn’t their friend when you’re searing them. Look for dry-pack scallops (We typically have them at Nino’s.). They are packaged without excessive amounts of briny juices, and as a result, they have a meatier scallop flavor and will brown much better, giving you much better flavor. If you can’t find dry pack, just be sure you pat them extra well between absorbent paper towels before you cook them. This tip applies to both sea (large) and bay (small) scallops.

Generally speaking, most shrimp comes to the markets frozen, whether shell on or off. If you’re lucky enough to be able to buy fresh shrimp, by all means do so. You’ll find them a bit more moist and flavorful.

Otherwise, when buying shrimp, don’t buy the huge ones (U-6, meaning under 6 per pound) or the small ones (under 30 per pound).

Stuffing huge shrimp is one thing, but when searing shrimp, you don’t want them to be too big (huge ones tend to be tough) or too small (because you’ll have to overcook them to get any color and flavor). I recommend 16–20 count. It’s pretty much the best of both worlds. 21-25 count is fine too.

When it comes to cooking, I’m going to focus on the most popular method of cooking scallops and shrimp, and that is pan-searing. 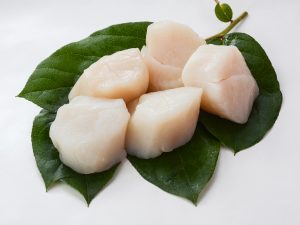 Shrimp and bay scallops can be seasoned by tossing in a little fine sea salt and freshly ground black pepper before searing them. Avoid iodized salt.

Sea scallops (the big guys) are a little different. Place the seasonings on the tops and bottoms only. And by the way, you can be a bit more generous; they’re bigger. Another benefit of a bit more salt is that it will actually help to crust the surface better.

A very little bit of oil please. I prefer a neutral-flavored oil like canola or peanut and lots of heat (medium high to high)! You’ll only get color and its resulting flavor with high heat. Pre-heat the pan until it’s very hot, add a tablespoon or so of oil, and then add your scallops and/or shrimp.

Cooking Tip # 3 Give Them Some Space

Don’t crowd the pan with food. Space each piece an inch or so apart, so that the resulting steam goes into the air instead of making a bubbly, opaque sauce around the scallops or shrimp. If you see that happening, either the temperature is too low or your food is too crowded (or both). Either way, there’s no fixing this outcome. Take your lumps and live to cook another day. Next time, use more heat and more space.

Pan-searing is a bit different from sautéing in that you’re not going to toss the product around in the pan (the French word sauté translates to “jump”). When you create air between the food and the pan, you don’t create heat, color or flavor. When it comes to scallops and shrimp, keep your seafood touching the pan until it’s time to turn them over.

Use tongs to turn your sea scallops and shrimp over (which you can check by peeking underneath to see their color).

This is by far the most important tip since the vast majority of seafood on this planet is overcooked (and not just a little).

When it’s time, turn them over with your tongs, and once again, keep them separated from one another. If a little smoke is rising from the pan, that’s a good sign that you’re doing something right. Congratulations!

Bay scallops (the little ones) are a bit different; they’ll be too difficult to turn over one by one. Just give the pan a shake or toss and then go back (if you care) and turn over those few that are still white side up. You only have a minute to 90 seconds to cook your bay scallops without overcooking them, so give them 1 minute on their own, undisturbed, and then 30 seconds of shake and stir. Done.

Give these tips a road test, and let me know how you fared.

For more information on shrimp and seafood, here are a couple of additional guides I’ve put together.

Summer is well along, and if you’re like many of us, you've probably already had your fill of burgers, hot dogs, steaks, chicken, and ribs…

When you’re in charge, the grill is hot and everyone is hungry, the stakes can get pretty high. Handling that pressure, however, is a whole…

No offense hot dogs, but nothing is more “American” than the hamburger. Like the hot dog, its ancestral “roots” may lie across the “pond."…