Unlike some of my Chef brethren, I’ve never professed to have been born to be a Chef.

It just kind of happened.

Growing up in the suburbs of Detroit, many of us pretty much did what most kids did back then. Went to school, had a paper route, did some chores, and played with friends until we were literally called in for dinner.

Food, not to cook with it, just to eat it.

Our Moms never actually called us fat. They used the word “husky”. We appreciated that.

The food Mom cooked was actually rather healthy. I just also discovered my sweet tooth at the same time and made all too frequent raids to the pantry and eventually discovered all her hiding spots for the cookies, the boxed brownie mixes (which I didn’t even care was yet baked, as we spooned the powder right out of the box into the oven…my mouth) and of course, the Holy Grail of sweetness, the chocolate, deliciously cream filled, Hostess Cupcakes.

The ones with the squiggles on top.

Of all the things Mom made frequently, we’d have to say that one of our very favorites were these pork chops that she sprinkled with some kind of powdered onion mix, then wrapped in foil and baked in the oven. We remember they were baked because that was one of the places Mom hid the cupcake and she would have to expose them to the open counter whilst the chops were cooking.

We don’t think this dish ever had a name. They were just part of the sentence “We’re having pork chops tonight”. For all we knew at 11 years old, it was the only way pork chops were cooked.

We never really paid attention to how she made them, and nothing was ever written down. We only saw bits an’ pieces.

Years later, many of us = ditched our paper route for an apron and started working in restaurants after school. The only “chops” we cared about were ones we were learning, not eating.

By the time many of us had decided to be foodies, Mom never liked us sticking our noses into her kitchen business.

“I was cooking before you were born!” she’d scold, “Don’t you come telling me that I’m not doing it right!” were the usual sentiments I hear when I got dangerously too close to the stove for her comfort.

But we never completely forgot about those pork chops.

Unfortunately, as things happen in life, I just never ever got around to asking her how she made those pork chops, even though Mom lived into her 90’s. 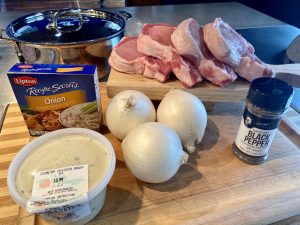 Decades have passed since the last time Mom, and we were in the kitchen together and I kinda forgot all about Momma’s Pork Chops. We figured they were just lost to antiquity.

We were walking the grocery aisles at Nino’s, and just by chance, happened by a young boy who reminded us, of the typical us, and a woman (who I presumed to be his mom) both looking at the canned soups.

And we don’t know why these things happen, some call it Synchronicity, but right over their shoulder, next to all the canned soups, were the boxes of Lipton Onion Soup mix.

And it dawned on us, that THAT’s what Mom must have used to make those delicious pork chops!

Of course, you can guess the rest of this story. We had to make Momma’s Pork Chops.

We must admit there are times that we tweak a recipe or two to suit my personal tastes but this time we wanted it to be as we remembered it. The method was easy enough, but there had to be some missing ingredients to make them SO “oniony” and so saucy?

Reverse engineering is my specialty. I’ve always been able to taste things, stir the ingredients in my mind and write recipes. I was counting on it.

Happily, I was able to recreate this recipe from my youth to enjoy and I share it with you to enjoy as well.

Mom, this one’s for you. We guess your “husky” son was always paying attention after all.

First, I spent a bit of time bending my brain to be sure I got this right and wrote this VERY simple recipe down for me to eventually share with you. One of the things that “make” this recipe is the confluence of a creamy chicken “sauce” with the beef flavor of the Lipton Soup Mix. Mixing both a chicken and beef flavor to make a sauce for pork isn’t unusual. As a matter of fact, it’s quite common. For all I know, my mom used a Campbell’s Cream of Chicken canned soup instead of the Chicken Gravy I am using here, but it would be very similar in outcome.

Second, it never even occurred to me that this recipe might ACTUALLY be on the side of the box of the Lipton Soup Mix I brought home.

Thankfully, after fishing the box out of my trash can just before it went to the curb days later….it wasn’t.

That would be just SO me…

Lastly, Mom used to use foil and wrap each pork chop before putting these “pork packages” on a sheet pan and into the oven. This recipe will use a large sauce pot or pan with a lid and cook them all together which is easier.

1. You’ll need a large fry pan or skillet (or saucepan) with a fitting lid that can ALL go into a 350 F oven.

2. Heat the pan/pot on medium high heat and one by one (or two by two), sear each pork chop on both sides until browned. As you proceed, set aside the browned pork chops and whatever juices they produce. Then begin step 3.

3. Once the chops are all browned, add the butter to the pan and all the onions. Reduce the heat to medium and stir the onions gently for 5 to 10 minutes or until softened and golden brown.

4. Add the chicken gravy, BOTH packets of the onion soup mix and black pepper, then stir 1 minute.

5. Add all the pork chops and their juices, and as you do, bury them in the onions and sauce so that they are all beneath the surface.

6. Place the lid on the pan/pot and place in the oven. Cook 2 hours.

7. Remove the pan from the oven and allow to rest 10 to 15 minutes (while still covered).

8. Portion 2 pork chops and an equal amount of the savory onions (with sauce) with each portion.

CLICK HERE TO LEARN ABOUT THE ART OF GRILLING PORK

CLICK HERE TO LEARN ABOUT THE HISTORY OF PORK CHOPS

Valentine’s Day is the celebration of love and affection, and it’s always very romantic to tell your loved one how much you appreciate them. So,…