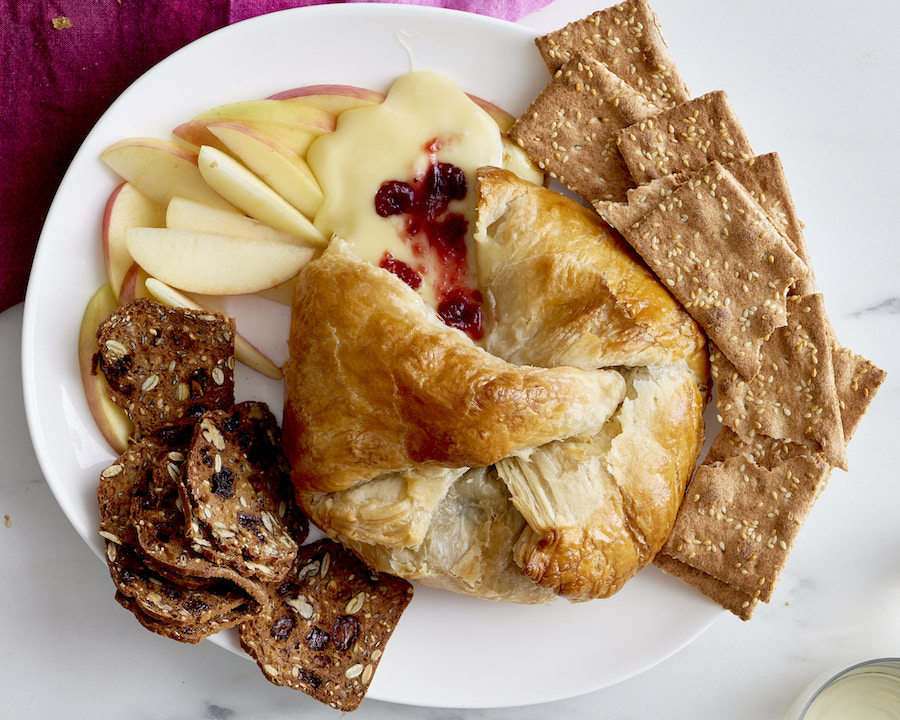 Brie cheese is one of the most decadent cheeses going and an especially versatile choice for entertaining. Brie’s rich, buttery, slightly nutty flavor can be enjoyed all on its own or on crackers or slices of toasted artisan bread. It is especially good paired with fruits, whether they are preserves, jams, or fresh.

During the holidays, Nino’s sells an enormous amount of Brie cheese. Small wheels, 1- and 2-kilo wheels and cut wedges of Brie are very popular choices for parties and a MUST on any assorted cheese board. Now, while Brie cheese is often served with crackers and accompanied by fruit, another hugely popular way to enjoy this cheese is baked.

Baked Brie is prepared by wrapping the cheese in pastry dough. The three most commonly used doughs are pie dough, puff pastry dough and filo (phyllo) dough, all three of which can be purchased in the dairy and frozen food aisles of nearly any well-stocked market (including Nino’s, of course).

Another choice is to use one of the prepared crescent roll or biscuit doughs in the tubes sold by the national brand Pillsbury®.

Whichever dough you choose, the method is pretty much the same. The cheese-encased pastry dough is then baked at a relatively high temperature for a relatively short period of time, just enough to bake the pastry to a nice golden brown and to melt the cheese within.

When done correctly, it’s crisp on the outside and ooey-gooey on the inside.

Besides the cheese and pastry, you can add additional ingredients under the crust to give your baked cheese added interest. Common extras include fig jams, fresh apricots, seared sliced apples, toasted nuts, herbs, spices, sun-dried tomatoes, caramelized onions, sautéed mushrooms, and roasted vegetables. The list is long and only limited by your imagination.

Here’s how to make Baked Brie.

Since Baked Brie is typically made for a small get-together, the most common size to use is a wheel of about 8” in diameter.

If you’re using a dough that needs to be rolled out (such as puff pastry dough, pie dough or crescent roll dough), lightly flour a flat work surface and roll the dough to approximately 1/8” thick. Using your Brie wheel as a template, make the dough piece large enough to cover the top surface, the side, and at least ½” tucked under the bottom.

Most Brie wheels are at least 1” thick. In that case, if you have an 8” round wheel, you would need a round disk of pastry dough 8” for the top surface + 2” (1 inch to cover each opposite side of the cheese), plus 1 more inch (for the ½” to tuck under on each side of the cheese). Thus, in total, you would need at least an 11” round disk of pastry dough to initially cover the cheese wheel.

If you intend to add any garnishments under the crust, you should plan on making your required amount of dough a little larger in diameter to be sure you end up having enough to account for that extra garnish and still have enough to cover the sides and tuck under the bottom.

After you’ve rolled out your dough and cut it to size, I recommend brushing the surface and sides of the Brie with a little beaten egg to help any garnishment and especially the dough to stick to the cheese. Then, add any spreads or garnishments to the top surface of your Brie.

Carefully lift up your dough and drape it over the wheel, evenly patting it down gently before tucking the extra bit over the sides and under.

It’s best to also have a bottom crust, and that’s a whole lot easier. All you need to do is roll out another piece of dough (a little larger than your cheese), brush it with beaten egg and place your wrapped Brie on top of it.

Trim your bottom crust to the exact diameter or leave an extra amount to crimp (like a pie).

Lightly brush the entire surface of the dough. At this point, if you have an artistic flair, you can use up any scrap pieces of dough to create a surface design, flowers or whatever inspires you. Just be sure to reapply some egg wash to any additional dough pieces you add.

Now you can refrigerate your ready-to-bake Brie overnight or go ahead and bake it in a pre-heated 400 F. oven for approximately 20 minutes or until the crust is golden brown.

For filo dough, the process is the same with the exception that you will need to lay out individual leaves of filo dough (one on top of the other) and then lightly brush melted butter between each as you create the diameter of crust you need for your Brie. I recommend 4 to 5 layers of filo to give you a nice crust.

Again, the most popular way to present your Baked Brie is with crackers or slices of French baguette (toasted or otherwise). It’s also appropriate to arrange some clusters of fresh grapes, some selected fresh berries, and slices of fresh pear or other tree fruits.

If you’re looking for some ideas to top your Brie before you add your crust, here are some suggestions:

We often preach about not straying too far from tradition when it comes to feeding your family and friends on the holidays. To this point,…

Before we share a few new ideas for you to try, let us offer a couple of tips. 1. Most recipes that are made entirely…

For all of you who tailgate without firing up a grill, you’re kind of ahead on the variety game because cold food menu choices are…