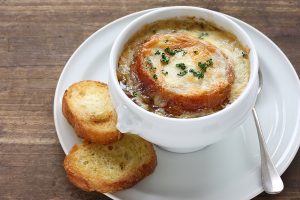 There are few soups in the world as famous as French Onion Soup a.k.a. Soupe Granitée à l’ Onion.

When I was growing up, it was on nearly every menu of any self-respecting restaurant. There was French Onion soup, and the second choice was Soup du Jour (soup of the day).

Maybe because it was “French” and that they were supposed to be the epicenter of the culinary world, but nothing screamed “gourmet” louder than the presentation of a glazed earthenware crock, full of steaming rich, mahogany brown broth, chocked full of caramelized onions and topped with a crouton raft of bubby, golden brown cheese.

It was a meal all unto itself and one that I’ve personally loved.

After I graduated from the Culinary Institute of America, and while French Onion Soup was still on most menus, there was a time I used the French Onion Soup Litmus Test as a kitchen quality check. If they couldn’t get THAT right, I had little confidence that they could master anything more complicated on the menu.

I must say, it was pretty darn accurate.

Later in my career, I had the opportunity to sample this iconic soup in the heart of Paris at a sidewalk café right on The Avenue Champs-Élysées. Half of me felt sheepish just ordering it, like I was trying to “fit in” or something. The other half just wanted to see if even the French had lost their “touch”. 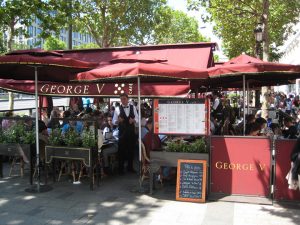 Nowadays, you rarely see this classic soup on American menus. It’s almost become a cliché. When it DOES turn up on a menu, it’s quite often rather “meh”. Lacking any number of “essentials” (like onions), and even more likely, too salty or artificial tasting from the use of a poor-quality commercial paste or powder instead of a quality stock.

Yet for something so “easy” how could it be so hard to do it well?

The answer? When a dish has a very simple method and very few ingredients, it all comes down to mastering (however simple) the WAY it’s made and quality of the ingredients used to make it. It’s not rocket science, but this is ONE recipe where patience is a virtue.

Too high of heat, because you’re impatient, the onions burn instead of caramelize and the result is bitter and unpleasant.

Taking a shortcut by using a toasted piece of fresh bread instead of a toasted crostini or croutons, using mozzarella cheese instead of Swiss or Gruyere, a poor broth 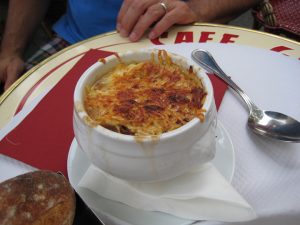 or stock, all culminate in “meh”.The recipe looks easy, and it really is, if you just pay attention to the details. What type of onions?Not all onions are created equal. That’s not to say some are worse than others in general, but rather that some onions suit certain recipes better than others and French Onion soup is the perfect example. 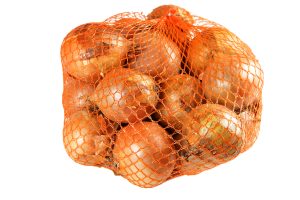 THE best onion for French Onion Soup is the yellow onions you most often see in a netted bag, and they look like this.

They look slightly smaller than a Spanish onion and for a good reason. Spanish onions are the same “grown up” onion but grown in low sulfur land, thus, the onion itself is lower in sulfur than the smaller yellow onion. They are a good second choice however.

Red onions, white onions, and all the “sweet” onion types such as Vidalia, Walla Walla and Bermuda are next on the list of candidates but in truth, they are actually a bit TOO sweet and lack enough onion “punch” to stand toe to toe with a good broth and melted cheese.

Having said all this, there are many additional opportunities within the recipe for cooks to “punch up” the quality of their soup and create something “truly” memorable. Among them are:

· Spritzing the toasted crostini /baguette slices with garlic oil before smothering with cheese.

· Using an aged Gruyere cheese and THEN a dusting of Parmigiano-Reggiano cheese instead of something of lesser quality.

So, you see that there is some room for personal expressions and choices even within this simple recipe. The devil, they say…is truly in the details.

1 French baguette, Sliced ½” On the Bias

1. Before beginning the soup, place the baguette slices on a cookie sheet and bake in a 350 F oven until crisp and slightly browned, then allow to cool.

2. In a large soup pot with a heavy gauge bottom, melt the butter on medium heat then add onions, garlic, and bay leaves.

3. Cook the onion mixture, stirring occasionally until the onions are softened and caramelize to a medium golden color. Be careful to adjust the heat as this mixture cooks so that the onions do not burn.

4. When the onions are softened and browned add the wine and turn the heat up to medium high and simmer until the wine and juices gone and the mixture is only onions and the butter fat.

5. Remove the bay leaves and thyme and sprinkle the flour over the onion mixture then cook, while stirring for 5 to 10 minutes on medium heat. Long enough to cook the raw flour into a sort of roux with the onions.

6. Add the beef stock/broth and bring to a simmer. Cook for about 10 minutes and season with salt and pepper to taste.

7. To serve, choose a serving bowl that can be placed under a broiler then ladle enough soup to fill the bowl 2/3 of the way.

8. Place the baguette slices over the soup top cover the top surface, then ladle a small amount of soup broth over them.

9. Finish with a ¼” layer of shredded Gruyere being careful to entirely cover the bread so that it does not burn.

10. Place the soup under the broiler (about 6” from the heat source) and broil until the cheese is bubbly and speckled brown.

· You can omit the flour and that part of the method if you prefer. The resulting soup will have a thinner “body” but taste nearly the same.

· Many Chefs, myself included, add a splash of either good quality Cognac or Sherry once the soup is removed from the burner and ready to be served.

· Swiss cheese can be substituted for the Gruyere

· Don’t “mince” the garlic, it can become bitter, a coarse chop will do.

· If you want your broth to be a bit darker, you can consider adding a small amount of Kitchen Bouquet (liquid).

· Not sure which onions? A mixture of any will do if that’s what you already have on hand.

· Regarding the wine, most Chefs use a Cabernet Sauvignon but in truth a Merlot, Zinfandel, Pinot Noir or any of the popular red varietals will do.

Chef Pete Loren is now in semi-retirement, after a storied 40 plus year career. He now serves as the Chef Emeritus at Nino Salvaggio International Marketplace. Explore more recipes HERE.

I must be on a nostalgia kick this month but nonetheless, after finishing my earlier posts on Pot Roast (Braising) and French Onion Soup, I…

Dips. You know. That creamy snack. The one surrounded by a platter of chips or crackers? Well, The Food Network recently published their list of…

Beyond Stew, Braising Made Delicious!

Whether you call it stew or pot roast, the method used to cook this delicious entrée is called braising. This simple cooking method has been…