Mark Twain was once quoted as saying, “There’s nothing as annoying as a good example.” And when it comes to preparing for large dinner parties or even a good-sized family meal, watching a chef prepare a multi-course dinner for a large group (solo) must be pretty annoying for someone who would give anything to prepare just ONE Thanksgiving or Christmas dinner without stress, aggravation, or failure.

I bring this up because the week before Thanksgiving I entertained about 30 guests in my home for a dinner reception, and I did it all on my own, with relative ease.

It amazed people that one person could create that much delicious food so quickly and still have time to enjoy himself. 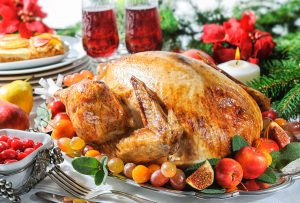 I hope I didn’t annoy anyone. I was just doin’ my thing.

The buffet menu consisted of a salad, four entrees, a vegetable, starch, breads and two different desserts–one a Pumpkin Baked Alaska, which I finished as many looked on.

Now admittedly, I have a nice kitchen and that helps, but honestly, I really only used one of my ovens and three burners to finish the dishes I chose to flash sear and re-heat at the last moment.

Probably the most important first step is to create a menu that allows you to prepare a great deal of the items in advance. In some cases, you’ll want to prepare items as many as two days in advance. This will spread out your work load so that you’re not stressed just before the party trying desperately to finish many items at the last minute.

The second most important thing is to choose menu items that don’t rely on just one cooking device (a burner top, oven, or just a microwave, for example). Create a menu that utilizes as many of your appliances as possible, so you’re not unintentionally creating a food traffic jam of dishes waiting to go in and out of your oven. Your Char-Griller or even a Crock-Pot can be dedicated to one menu item.

For example, one of my entrees was Char-Grilled Mongolian Pork Tenderloin. In this case, I made the Mongolian Marinade a week ahead and froze it. Then two days before the party, I thawed the marinade and marinated my tenderloins overnight in it. The evening before the party, I char-grilled the exterior, leaving the meat rare, and placed the tenderloins on a sheet pan to finish at 400 F just before the party. Done. All I had to do was pop them in the oven, baste them with more marinade and then slice them–easy peasy. And if my oven had been a bit taxed, I could just as easily have finished them on the Char-Griller.

I did something similar with my Chicken Enchilada Egg Rolls. I made those a day ahead of time too. Then, I fried them in oil until light brown in color and placed them on a sheet pan. All I had to do was uncover them and finish browning them in my oven just before my guests arrived. It was all scratch-made food, but it was made to be convenient for me, by me.

I prepared my salmon likewise, choosing 2” x 2” pieces of salmon fillets, which I placed on a silicon baking mat, brushed with butter, seasoned with salt and pepper, and then topped with a spinach and artichoke mixture. Once again, it was a dish ready to place into the oven, under the broiler. And it only took minutes to finish.

My salad was pre-cut, washed and all prepped, covered tightly with plastic film and just waiting to be tossed with a kit of garnishments also nested right there. I didn’t have to search the cooler for a thing.
My starch dish was a Wild Rice Pilaf, which I prepared in its entirety the day before and placed in two Pyrex casserole dishes. When the time came, they just went into the microwave oven for 6 minutes each, and I had a perfect rice pilaf once again. No fuss, no muss.

I chose to use my just-before-service time to sauté my colorful medley of fresh vegetables (because you just CAN’T do that ahead of time and do them justice) and to sear my Jumbo Scallops and Shrimp, which (again) I served with a Lobster Sauce I made two days earlier.

Including slicing my Pork Tenderloin, the amount of time I spent to finish preparing all my dishes, plate them and get them to the buffet table in my dining room was about 15 minutes. Of course, I have to admit that a few of my friends, volunteered to run some food to the buffet. I had planned for that by placing tent menu cards, with the name of each dish and what was in it, in front of each of my small chafing dishes and table displays. In addition, I placed the service wares (tongs and spoons) needed for each dish at each station, just to save a little more time.

It was fun, and I had time to enjoy my own party.

What would I do differently next time?

Admittedly, even I learn something each time I do these high-wire acts. And the one BIG thing I’ll be sure to do next time is this:

I love to keep my kitchen clean and organized, even when I’m hosting these big events. Unfortunately, I generate so many dirty pots, pans, tongs, spoons, spatulas, and bowls in such a short amount of time that, well, my sink and adjacent counters are just mounded with debris. And everyone feels bad that I’ll have so much cleanup work afterwards.

Next time, I’m going to drag in my two large picnic coolers and just quickly rinse and toss every dirty pot, pan, and utensil into the coolers just before I finish my last-minute cooking and plating. Then, I’ll drag them out to the garage.

The kitchen will be clean, and my guests will be spared the hum of my dishwasher all evening.

Regardless of which month of the year or season you are in, its always good to eat healthy and to get you in that gear I…

You’ve got the Bubbly. So now what? What foods go great with Champagne? Whether Champagne or “Sparkling Wine”, most bubbly wines that people enjoy on…